Litecoin price remains in a bearish trend below $130 against the US Dollar. LTC/USD is likely to extend declines towards the $100 handle in the near term.

There was no major upside recovery above $125 in litecoin price against the US dollar. The LTC/USD pair remained confined in a range above the $115 support level before making a downside move.

Looking at the chart, the price consolidated for a few sessions above the $115-116 support zone. Buyers failed to push the price above the $125 resistance, which resulted in a major bearish reaction. 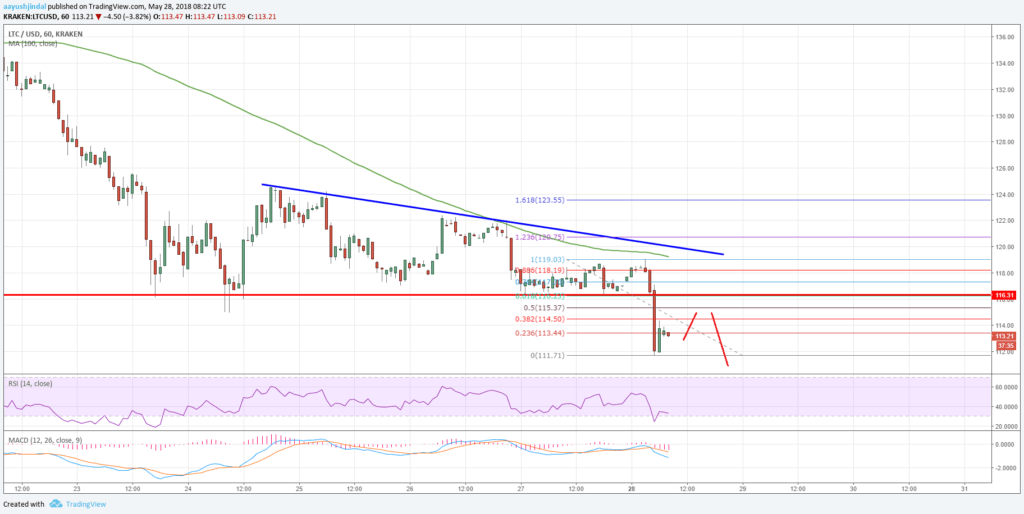 The price declined and broke the $115 support level to trade to a new monthly low. The recent low was $111.71 and it seems like the price remains at a risk of more losses. On the upside, an initial resistance is near 38.2% Fib retracement level of the last slide from the $119.03 high to $111.71 low.

Moreover, there is a new connecting bearish trend line in place with resistance at $120 on the hourly chart of the LTC/USD pair. A close above the trend line, $120 and the 100 hourly simple moving average is needed for more gains in the near term.

On the downside, a break below the recent low of $111.71 may perhaps open the doors for more losses. The next stop for sellers could be near the $100 handle, which is a key pivot level.