Nothing in this article is to be construed as investment advice. Neither the author nor the publication assumes any responsibility or liability for any investments, profits or losses you may incur as a result of this information.

Litecoin continues its struggle to find bullish support, as the asset drops a further -2% against the US dollar trading pair. Over the last ten days, however, LTC has managed to slow down its descent somewhat, and has found a temporary foothold around the $53-$57 range as bulls fight desperately to keep LTC away from the dangerous psychological level at $50.

In the news lately, Litecoin has been fairly quiet. A research paper written by eToro Senior Analyst Mati Greenspan at the start of the month brought Litecoin back into the public eye, coining the project as “Silver to Bitcoin’s Gold”. His insightful analysis of Litecoin’s technical upsides compared to other projects is likely to have likely inspired investors to reconsider the #7 cryptocurrency despite its declining value. The Litecoin Foundation has also been busy promoting the new Litecoin Summit event, scheduled to be held in San Francisco next month. The Summit could provide some much-needed LTC market stimulation to recuperate losses from the past three bearish months.

Diving into the 1D LTC/USD chart analysis we can see that the asset continues to track closely inside a falling bearish wedge, propped up at the moment by the upper level of the first support channel (blue), at $54. If Litecoin can carry on traveling sideways along this line, we could finally see it break free of an 8-month long downtrending resistance.

Litecoin is a difficult asset to predict right now. Conflicting indicators at the moment are suggesting buyers and sellers are uncertain which way to position themselves in the market. This could be a result of Bitcoin’s current performance and how it is also travelling sideways without a clear indication of which direction it is heading.

Judging by the candles over a closer 2hr range, we can see that power seems to be leaning with the bears at this moment; with each candle having progressively lower highs as selling pressure forces down the bulls’ activity.

All price targets are set from the current value of LTC at $56.26. 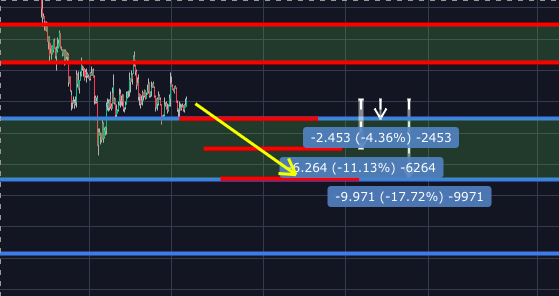 Price Target 2: From there we could see the support fail and see the first test of the psychological $50 level. (-11.13%)