On November 14, Charlie Lee, the creator of Litecoin, posted a tweet about the Bitcoin Cash hard fork which is scheduled today. He stated that the fork will be a good real-world test of the Nakamoto consensus. The crypto-community is filled with speculations about the upcoming fork of Bitcoin cash, which will cause it to fork into Bitcoin ABC [supported by Roger Ver, Jihan Wu] and Bitcoin SV [supported by Craig Wright].

Charlie Lee, in his tweet, spoke about miners moving back to mining Bitcoin if BCH dies, and an entity gaining enough hash power to execute a 51% attack on the competing fork. 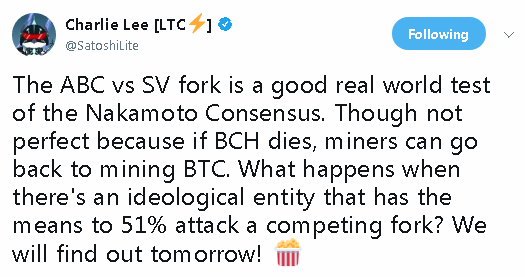 The ‘Hash War’, so called because the upcoming fork has a conflict of interest between Jihan Wu and Craig Wright. The person who controls the majority hash power after the fork will have the upper hand, thus the fork with the highest hash power will be validated and accepted.

Nakamoto consensus is a set of rules defined by Satoshi Nakamoto in the Bitcoin whitepaper, which determines which block is validated and added to the blockchain. The blocks are added by miners through PoW.

“Proof-of-work is essentially one-CPU-one-vote. The majority
decision is represented by the longest chain, which has the greatest proof-of-work effort invested
in it. If a majority of CPU power is controlled by honest nodes, the honest chain will grow the
fastest and outpace any competing chains”

According to Lee, if either of the teams, gain enough mining power, they could fatally damage the forks by executing a 51% attack. If the miners gain control of the hash power above 50%, it means that they could stop the transactions from going on the block, thus stopping payments between parties.

Additionally, they would have enough hash rate to reverse the transactions. Since they have control of the network, they could also double spend the coins. So successfully gaining hash rate by either party could be used to destroy the competing fork.