Summary: As of mid-May 2018, Google has reverted back to shorter display snippets. Our data suggests these changes are widespread and that most meta descriptions are being cut off in the previous range of about 155–160 characters.

Back in December, Google made a significant shift in how they displayed search snippets, with our research showing many snippets over 300 characters. Over the weekend, they seem to have rolled back that change (Danny Sullivan partially confirmed this on Twitter on May 14). Besides the obvious question — What are the new limits? — it may leave you wondering how to cope when the rules keep changing. None of us have a crystal ball, but I’m going to attempt to answer both questions based on what we know today.

I pulled all available search snippets from the MozCast 10K (page-1 Google results for 10,000 keywords), since that’s a data set we collect daily and that has a rich history. There were 89,383 display snippets across that data set on the morning of May 15.

I could tell you that, across the entire data set, the minimum length was 6 characters, the maximum was 386, and the mean was about 159. That’s not very useful, for a couple of reasons. First, telling you to write meta descriptions between 6–386 characters isn’t exactly helpful advice. Second, we’re dealing with a lot of extremes. For example, here’s a snippet on a search for “USMC”:

Marine Corps Community Services may be a wonderful organization, but I’m sorry to report that their meta description is, in fact, “apple” (Google appends the period out of, I assume, desperation). Here’s a snippet for a search on the department store “Younkers”:

Putting aside their serious multi-brand confusion, I think we can all agree that “BER Meta TAG1” is not optimal. If these cases teach you anything, it’s only about what not to do. What about on the opposite extreme? Here’s a snippet with 386 characters, from a search for “non-compete agreement”:

Notice the “Jump to Exceptions” and links at the beginning. Those have been added by Google, so it’s tough to say what counts against the character count and what doesn’t. Here’s one without those add-ons that clocks in at 370 characters, from a search for “the Hunger Games books”:

So, we know that longer snippets do still exist. Note, though, that both of these snippets come from Wikipedia, which is an exception to many SEO rules. Are these long descriptions only fringe cases? Looking at the mean (or even the median, in this case) doesn’t really tell us.

Sometimes, you have to let the data try to speak for itself, with a minimum of coaxing. Let’s look at all of the snippets that were cut off (ending in “…”) and remove video results (we know from previous research that these skew a bit shorter). This leaves 42,863 snippets (just under half of our data set). Here’s a graph of all of the cut-off lengths, gathered into 25 character bins (0–25, 26–50, etc.): 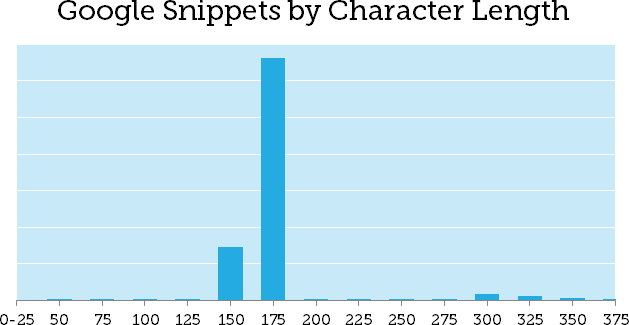 This looks very different from our data back in December, and is clearly clustered in the 150–175 character range. We see a few Google display snippets cut off after the 300+ range, but those are dwarfed by the shorter cut-offs.

Obviously, there’s a lot happening in that 125–175 character range, so let’s zoom in and look at just the middle portion of the frequency distribution, broken up into smaller, 5-character buckets: 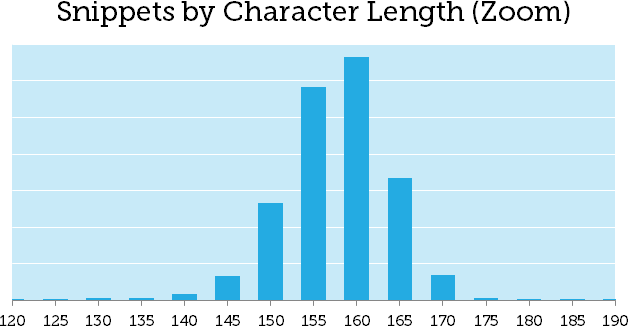 We can see pretty clearly that the bulk of cut-offs are happening in the 145–165 character range. Before December, our previous guidelines for meta descriptions were to keep them below 155 characters, so it appears that Google has more-or-less reverted to the old rules.

Keep in mind that Google uses proportional fonts, so there is no exact character limit. Some people have hypothesized a pixel-width limit, like with title tags, but I’ve found that more difficult to pin down with multi-line snippets (the situation gets even weirder on mobile results). Practically, it’s also difficult to write to a pixel limit. The data suggests that 155 characters is a reasonable approximation.

To the Wayback Machine… ?!

Should we just go back to a 155 character cut-off? If you’ve already written longer meta descriptions, should you scrap that work and start over? The simple truth is that none of us know what’s going to happen next week. The way I see it, we have four viable options:

Some sites don’t have meta descriptions at all. Wikipedia happens to be one of them. Now, Google’s understanding of Wikipedia’s content is much deeper than most sites (thanks, in part, to Wikidata), but many sites do fare fine without the tag. If your choice is to either write bad, repetitive tags or leave them blank, then I’d say leave them blank and let Google sort it out.

You could just write to the length you think is ideal for any given page (within reason), and if the snippets get cut off, don’t worry about it. Maybe the ellipsis (…) adds intrigue. I’m half-joking, but the reality is that a cut-off isn’t the kiss of death. A good description should entice people to want to read more.

(3) Chop everything at 155 characters

You could go back and mercilessly hack all of your hard work back to 155 characters. I think this is generally going to be time badly spent and may result in even worse search snippets. If you want to rewrite shorter Meta Descriptions for your most important pages, that’s perfectly reasonable, but keep in mind that some results are still showing longer snippets and this situation will continue to evolve.

Is it possible to write a description that works well at both lengths? I think it is, with some care and planning. I wouldn’t necessarily recommend this for every single page, but maybe there is a way to have our cake and eat at least half of it, too…

I’ve been a bit obsessed with the “inverted pyramid” style of writing lately. This is a journalistic style where you start with the lead or summary of your main point and then break that down into the details, data, and context. While this approach is well suited to the web, its origins come from layout limitations in print. You never knew when your editor would have to cut your article short to fit the available space, so the inverted pyramid style helped guarantee that the most important part would usually be spared.

What if we took this approach to meta descriptions? In other words, why not write a 150-character “lead” that summarizes the page, and then add 150 characters of useful but less essential detail (when adding that detail makes sense and provides value)? The 150/150 isn’t a magic number — you could even do 100/100 or 100/200. The key is to make sure that the text before the cut can stand on its own.

Think of it a bit like an ad, with two separate lines of copy. Let’s take this blog post:

In December, we reported that Google increased search snippets to over 300 characters. Unfortunately, it looks like the rules have changed again.

According to our new research (May 2018), the limit is back to 155-160 characters. How should SEOs adapt to these changes?

Line 1 has the short version of the story and hopefully lets searchers know they’re heading down the right path. Line 2 dives into a few details and gives away just enough data (hopefully) to be intriguing. If Google uses the longer description, it should work nicely, but if they don’t, we shouldn’t be any worse for wear.

Should you even bother?

Is this worth the effort? I think writing effective descriptions that engage search visitors is still very important, in theory (and that this indirectly impacts even ranking), but you may find you can write perfectly well within a 155-character limit. We also have to face the reality that Google seems to be rewriting more and more descriptions. This is difficult to measure, as many rewrites are partial, but there’s no guarantee that your meta description will be used as written.

For now, it appears that the 155-character guideline is back in play. If you’ve already increased some of your meta descriptions, I don’t think there’s any reason to panic. It might make sense to rewrite overly-long descriptions on critical pages, especially if the cut-offs are leading to bad results. If you do choose to rewrite some of them, consider the 150/150 approach — at least then you’ll be a bit more future-proofed.